Bella de Paso is really excited to announce that we will have a booth the upcoming Eco Xpo organized by Goin’ Native in San Juan Capistrano, CA on May 17th and 18th!  It’s free to the public (!!) and we’d love to share some of the Beauty of Paso (and San Juan) with you!

Eco Xpo is a celebration of all things sustainable and local happening right in San Juan Capistrano (SJC), CA.  It’s part festival, part education, and part market.  It all comes together to form the impetus of what we think will be the wellspring of a new culture and movement.

It’s organized by Goin’ Native, a great local nonprofit here in SJC.  For years, they’ve been using gardening as a nexus of education, therapy, and community outreach.  The Los Rios district in town is one of the oldest residential neighborhoods in California and has a great park space, called Los Rios Park, filled with lots of native plants.  Normally, it might take a fair bit of costly landscaping work to manage the upkeep.  But Goin’ Native banded together a steady group of volunteers that has helped the park thrive.  They’ve used it as a destination for curious students, a source of employable skill building for the Adult Workability Program, and even built a haven for the rare Monarch butterfly.  Read more about them here. 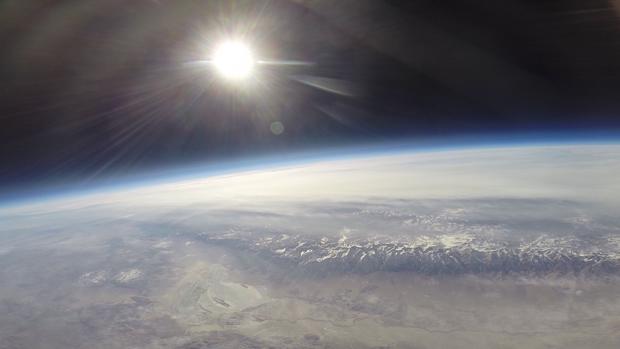 A not so encouraging view of the California drought from the edge of space. (Source: LA Times)

They have helped to coordinate the Xpo as an event centered around the idea of sustainability.  In case you haven’t been paying attention, California is in the midst of the worst drought in 434 years.  It threatens the $44.7 billion agricultural industry in state, not to mention the average water user.  I’ve lived in California for most of my life and can tell you the laissez-faire attitude most Californians have toward water consumption.  It’s somewhat understandable when there’s literally an ocean of the stuff sitting mere miles from most of us, but it’s still pretty shocking to see just the amount of water that gets wasted daily as if the ‘concrete jungle’ was a reality and not a cute metaphor for urban sprawl.  I suppose it’s a product of the sheer audaciousness that it took to look at the desert and think we could ever thrive here.  But we can only dance around like water guzzling Sam Cassells in defiance of measured consumption curve rates for so long before we have to pay the price for our … ahem… arrogance.

Which makes the topic and the hoped-for cultural shift of the Eco Xpo so vital.  They’re bringing in a bunch of excellent speakers to educate people about watering methods, water-wise landscaping opportunities, and existing and emerging technologies and methods that can all contribute to a more sustainable balance.  It’s not just limited to water sustainability either.  There is a proven nexus between water and energy consumption so it’s only fitting that electric cars and solar energy will be making an appearance.  To make the event a true community endeavor, they’ve also invited various local vendors and demonstrators to take up space (carefully, of course!) in the park.  To get a more detailed idea of what it’s all about, check this out.

So… Where Does Bella de Paso Fit In To This?

Like I mentioned, we will be one of the vendors in the space for the two days, selling our extra virgin olive oil.  At first it may seem like we should be on the other side the canopy, learning about all these sustainable practices that we can take back to our grove.  While it’s true that we can certainly benefit from what’s discussed and demonstrated at the Eco Xpo, I think we have an important part to contribute.  You see, at the heart of the Xpo is the idea of cultural change.  If all they wanted to do was lecture folks about the importance of sustainability, they could use any number of public spaces around San Juan and set up a roll call of powerpoint-wielding speakers.  But that doesn’t spark any sort of change or spur anyone to action.  Cultural change is the result of a paradigmatic shift.  It requires a concerted effort on an individual level to change the way we interact with the world.  In short, it requires engagement.  It’s why the Xpo will have lots of hands on demonstrations and exhibits.  Tactility breeds engagement.  Why tell you something when I can show it to you or, even better, when I can guide you through it?  This engagement will breed consciousness.  It’s an awareness of the impact we have on resources and steps we can take to mitigate that impact.

But engagement is often most effective when it’s personal.  It’s much easier to engage something that directly affects us.  Limiting the scope of where we start looking to engage is a way to keep everything from becoming overwhelming and preventing immobility.  Which brings me to Bella de Paso.  Eating is something we do literally every day (if we are fortunate).  And it’s one of the most basically personal cause-effect relationships we have.  The mantra “you are what you eat” is one we hear over and over again and is itself a call to be conscious and engaged in what we are consuming.  Having dived into the world of extra virgin olive oil, I can say with certainty that there is a real difference in a high quality EVOO and some of the stuff we get right off the grocery store shelf.  At Bella de Paso, we take a lot of pride in knowing that we’re giving you a true extra virgin olive oil and it’s not just because it tastes delicious (that’s a big part of it!).  It’s also because we know how good a bona-fide EVOO is for your health.  We love sharing that information and the finished the product with as many people as possible.

So to make a long story short, Bella de Paso is going to be at Eco Xpo because we believe in the commitment to conscious engagement.  We hope that people who become a little more aware of their food choices will become similarly engaged in the choices they make regarding their energy and water use.  This constant awareness on an individual level snowballs into a community movement of sustainability that is truly powerful.  We’re really excited to be a part of this and we look forward to engaging with as many of you as we can in May!

About the Author: Alex